Standing together to strengthen refugee response Chief Rabbi Sizomu Gershom of Uganda arrives for the start of the Welcoming the Stranger conference. All Photos: LWF/M. Renaux

Interfaith conference highlights how Christian, Muslim and Jewish groups are working to ‘welcome the stranger’

(LWI) - Leaders of Christian, Muslim and Jewish groups responding to refugee crises in different parts of the world gathered in Geneva on 20 June to share best practices in an increasingly challenging global context. Representatives of more than 50 faith-based organizations are taking part in a two-day conference entitled ‘Welcoming the Stranger, Shaping the Future’. The event is a joint initiative of The Lutheran World Federation (LWF) in partnership with Islamic Relief Worldwide (IRW) and HIAS, the Jewish humanitarian group working with refugees and asylum seekers.

In opening remarks, LWF General Secretary Rev. Anne Burghardt insisted that a coordinated response from people of faith to the current global refugee crisis is needed more urgently than ever before. In the context of the war in Ukraine, with rising fuel prices, spiraling inflation and fears about food supplies, she said “many western countries are turning inwards and as faith-based organizations, we cannot remain silent.” 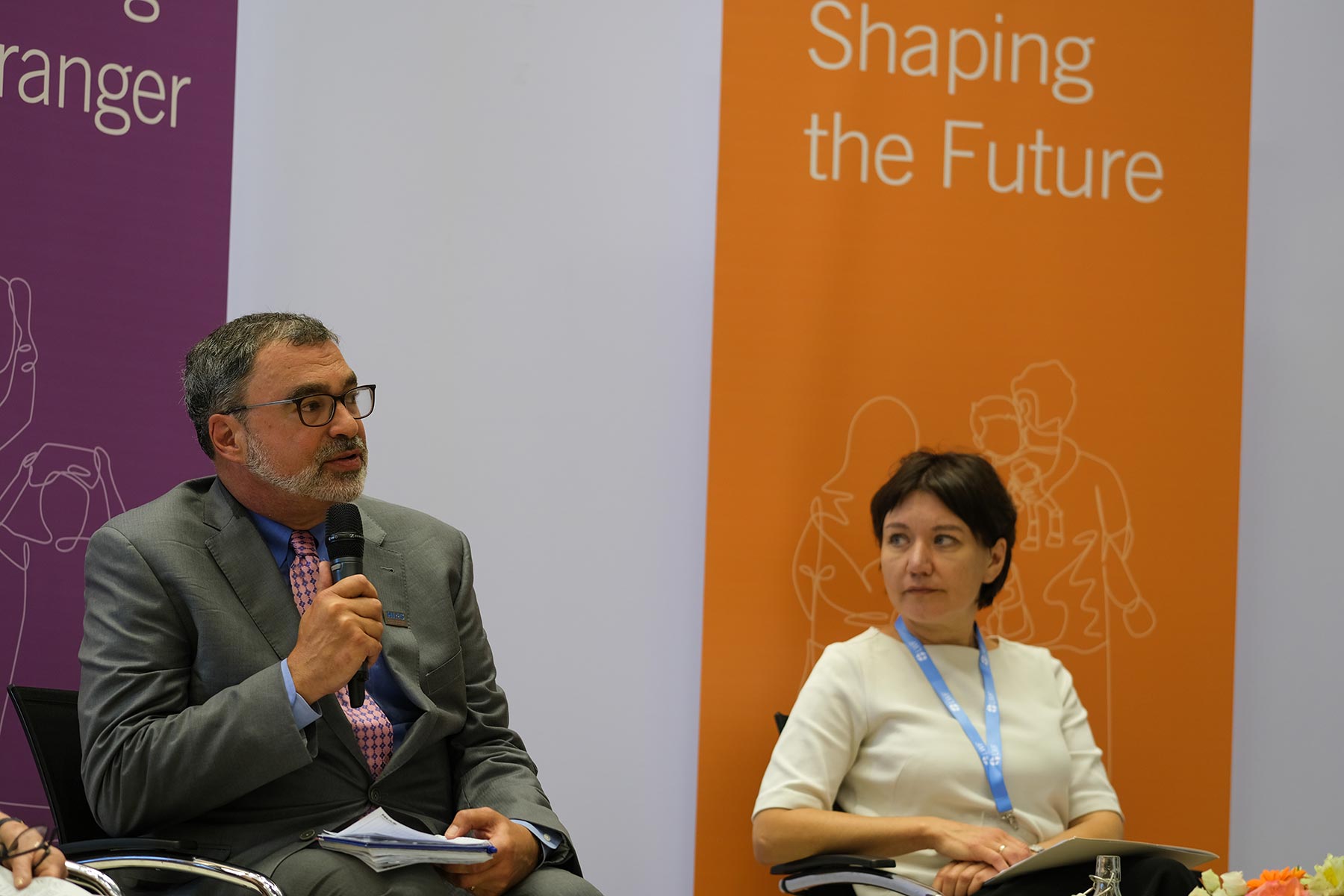 Echoing her words, HIAS President and CEO, Mark Hetfield noted that the Jewish community makes up just “a tiny percentage” of the world’s population. “We have to act together,” he said, because “we know that we can do nothing by ourselves.” Acknowledging that “religions can be part of the problem” during conflicts and crises, he insisted that “we need to have tough conversations to make sure that faith and religions are part of the solution.”

Waseem Ahmad, the CEO of IRW, underlined the importance of strengthening and providing greater resources for grassroots communities that are working daily to give dignity to refugees. “We come here today to humbly listen and to learn from local groups,” he said, adding that Islam places strong emphasis on the requirement of believers to “welcome refugees into our homes.” 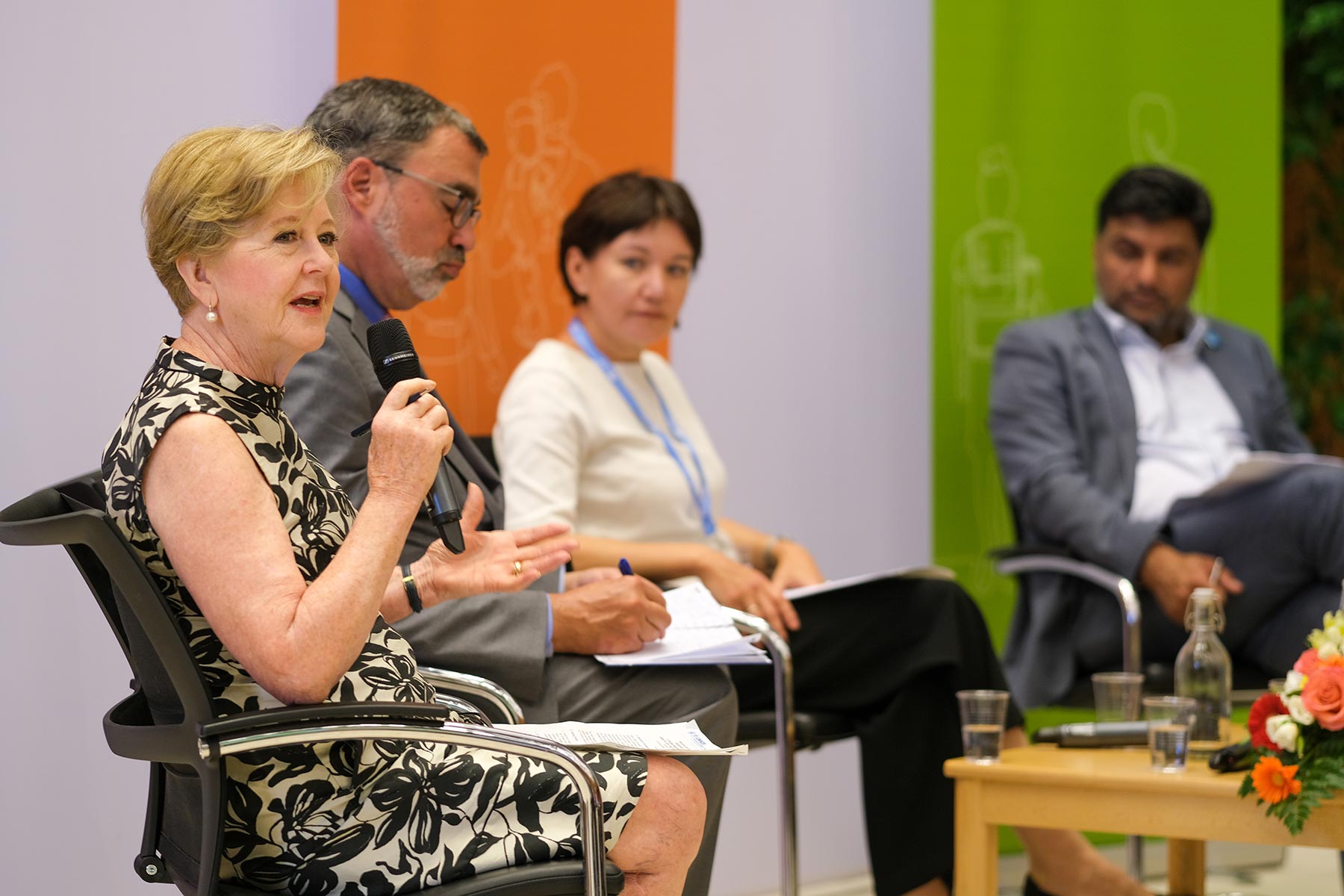 Joining the religious leaders during the opening session was Gillian Triggs, the Assistant High Commissioner for Protection at UNHCR, the United Nations refugee agency. During the COVID-19 pandemic, she said, “we learned that we need to work more closely with local communities,” including faith-based organizations. These groups, she said, “were able to access refugee camps or places of conflict” and often “stay there after the funding [of international agencies] has run out.”

Religious leaders from the three faith communities spoke of the theological imperatives contained in the sacred texts of each tradition. Archbishop Antje Jackelén of the Church of Sweden noted that “the theme of caring for the stranger runs like a red thread” through both Christian and Hebrew Scriptures. She also reflected on the way that Jesus himself was challenged by “a stranger,” the Canaanite woman in Matthew’s gospel who “persuades him to rethink his mission.” The archbishop, who initiated a European interfaith network called ‘A World of Neighbours’, said:

“Never underestimate the gifts of courage, resilience and wit that a stranger may bring to you.” 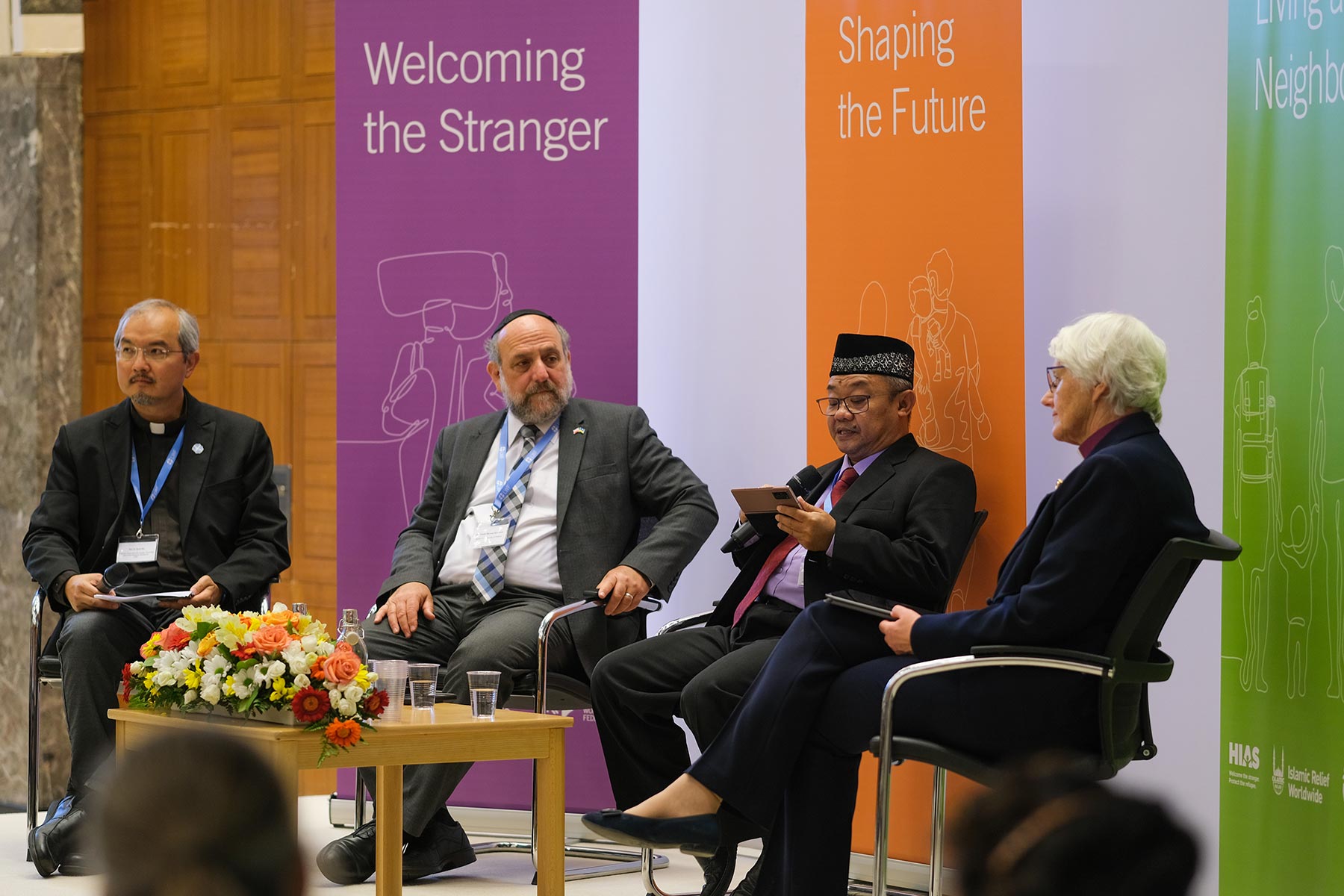 From left to right, Rev. Dr Sivin Kit, LWF Program Executive for Public Theology and Interreligious Relations, Chief Rabbi of Poland Michael Schudrich, Professor Abdul Mu’ti, Secretary General of the Central Board of Muhammadiyah and Archbishop Antje Jackelén of the Church of Sweden

Professor Abdul Mu’ti, Secretary General of the Central Board of Muhammadiyah, an educational non-governmental organization in Indonesia, insisted that Muslims are required by their faith to be people of peace and to protect all those in need, especially the most vulnerable. Failure to do so, he said, is seen as a sign of disobedience to God.

The Chief Rabbi of Poland Michael Schudrich spoke of the recent experience of the Jewish community in his country providing support to millions of Ukrainian refugees fleeing from the Russian attacks on their towns and cities. At the start of the war, the community in Warsaw set up a crisis management team and he reflected on the way that Polish Jews had gone from being on the receiving end as refugees to becoming those who are "learning how to give to others in need.” 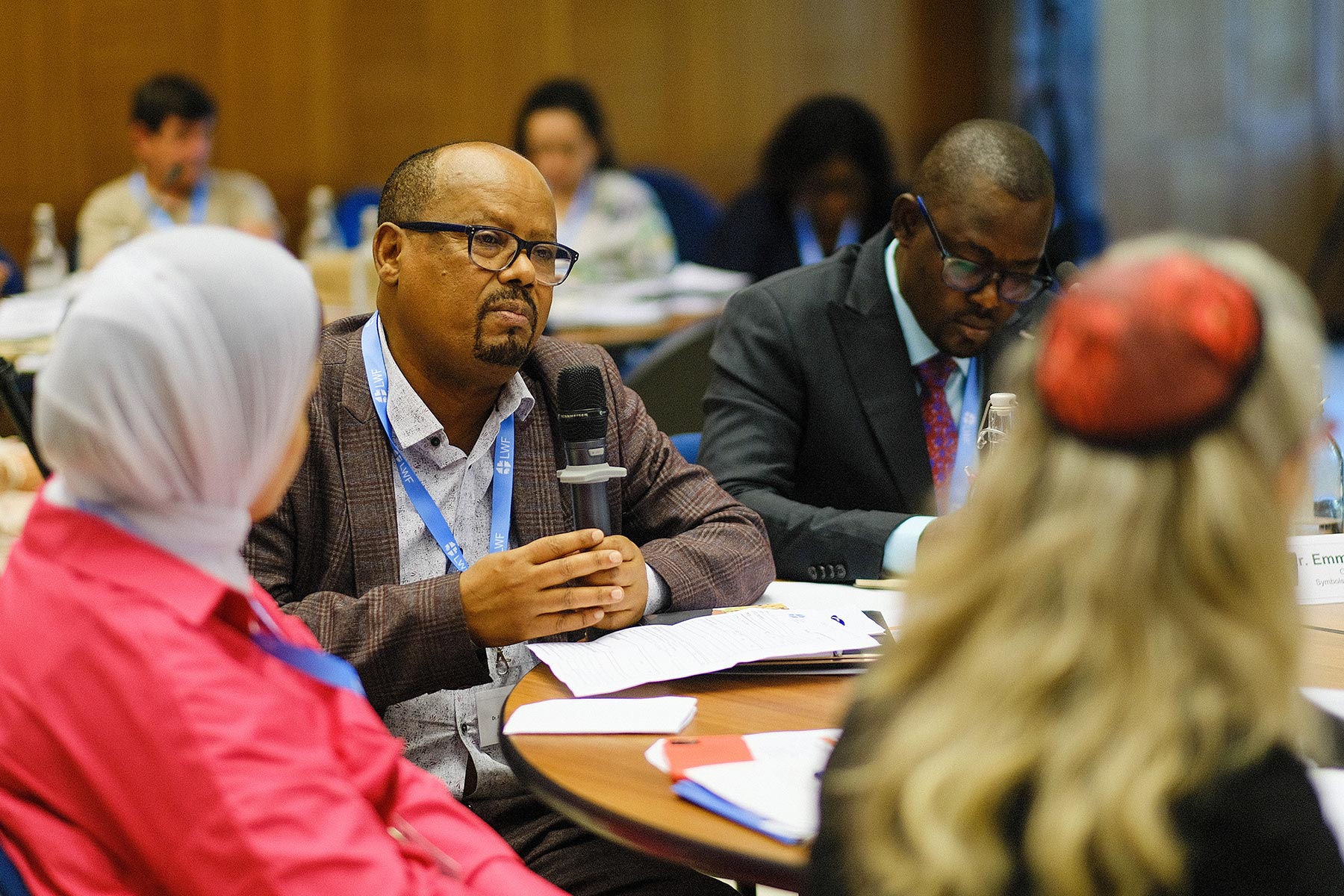 Representatives of many grassroots organizations shared examples of their work with refugees and host communities, as well as returnees who have survived traumatic experiences of human trafficking, rape and torture. Rev. Emmanuel Gabriel from the Lutheran Church of Christ in Nigeria and Dr Abeya Wakwoya, director of the Development and Social Services Commission of the Ethiopian Evangelical Church Mekane Yesus, spoke about the Symbols of Hope project which provides pastoral and psychosocial care for returnees, as well as offering them skills training and livelihoods support.

Nageeba Hassan Tegulwa, Muslim co-chair of Interfaith Women in Uganda, described her work in developing educational tools for young refugees and members of host communities to prevent them from fighting over scarce resources. The training project focuses on healing and overcoming stigma, teaching the youth of both communities to see themselves “as complementary pieces of a puzzle.” 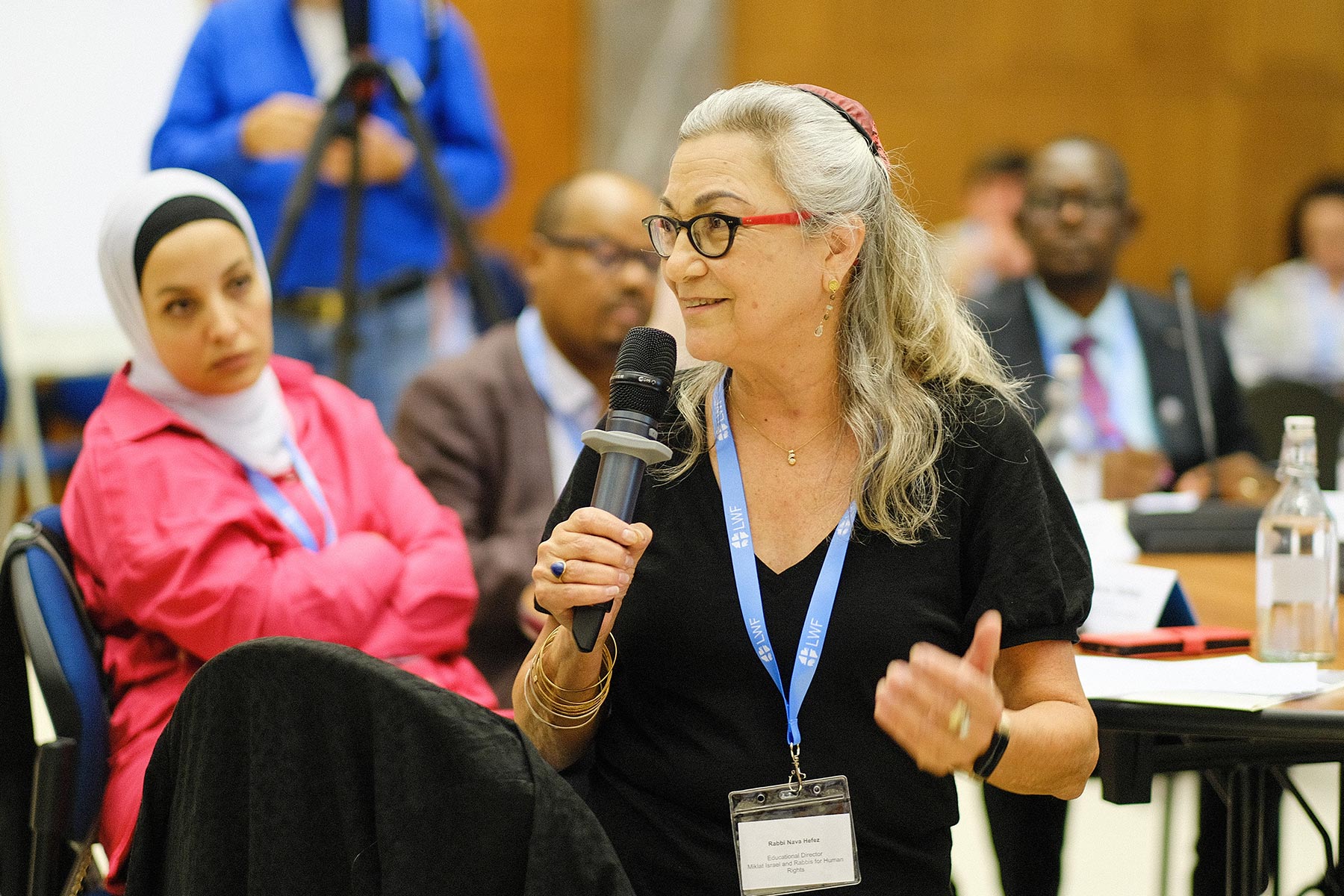 Rabbi Nava Hefez from Jerusalem, education director of a project called ‘Miklat Israel’ (Shelter Israel) spoke about the work of the organization which started to support mainly Sudanese and Eritrean asylum seekers who were facing deportation by the Israeli government in 2017. Some 2,000 Israeli families came forward to offer protection and a safe hiding place for those threatened with deportation, while demonstrators from the organization took to the streets of Tel Aviv to protest against the demonization of the African migrants.

Heidy Quah, a young human rights activist in Malaysia, founded a group called Refuge for the Refugees to develop services and networks that empower migrants to advocate for their rights. She spoke about the work of the organization during the pandemic as the government targeted migrant workers who were detained, denied vaccines and accused of being “COVID carriers,” she said. During that difficult time, she added, the organization mapped out the responses offered by churches, mosques and gurudwaras so that migrants could find the nearest source of help and support. 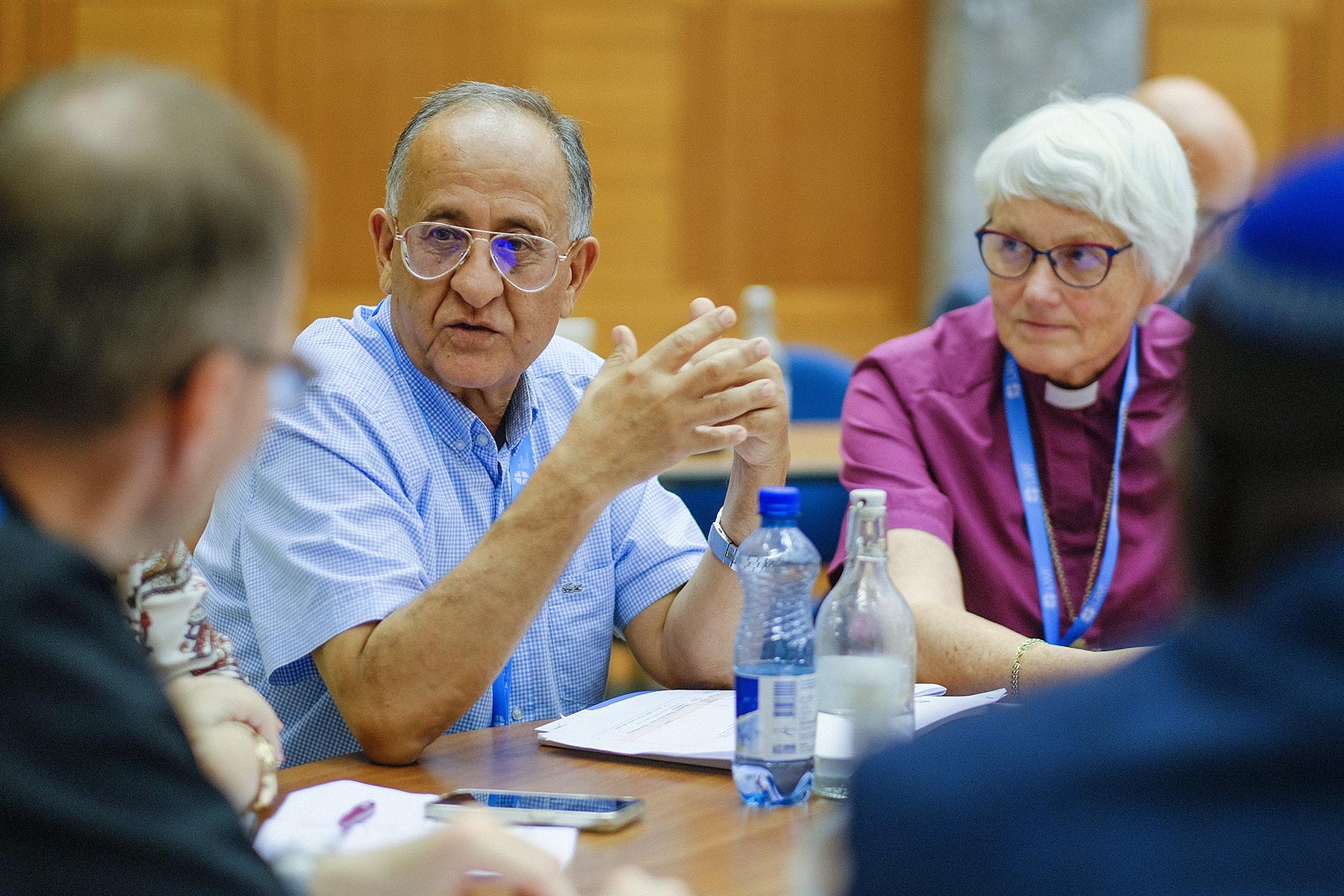 Syrian psychiatrist, Dr Mohamed Abo Hilal, himself a refugee living in southern Turkey, shared stories of his work with an organization called Syria Bright Future that provides services for other war survivors, especially orphans and women who have been victims of gender-based violence. The role of faith, he noted, is often an important part of the recovery process for these refugees, yet non-governmental organizations like his own “are not able to mention the faith component.” The 2018 manual of faith sensitive approaches in humanitarian action, published by LWF and IRW, in partnership with HIAS and other faith-based and secular organizations, was helpful in changing that narrative, he said.

Dr Mongi Slim, regional president of Tunisian Red Crescent, described the work of his organization in the south of the country, close to the Libyan border. “We receive a lot of bodies of people that have died at sea,” he said, describing the way that a DNA sample is taken from each of the victims in an effort to identify them and notify their families. “Each refugee is buried with a number,” he explained, “but each one has a name and a family, with parents who want to know where their children are.”

Participants called for stronger support for their work, through stepped-up interfaith advocacy and awareness raising, more robust financing for local organizations and increased education around refugee protection in the different religious traditions. Religious leaders, they insisted, can play a vital role in changing narratives about the welcome and integration of refugees, as well as equipping secular organizations to engage more effectively with people of faith.