COVID-19: Build back lives and resilience in Nepal | The Lutheran World Federation
Skip to main content

COVID-19: Build back lives and resilience in Nepal Sakina Khatun holds her youngest child in front of the family home, which needs a better roof and sanitation. All photos: LWF/ Y. Gautam

LWF and the City of Geneva support marginalized families

(LWI) - "I debated whether to go begging at the community market, but I thought of my children and their future. I do not want them to feel weak and hopeless or to feel the stigma of having to beg."

Sakina Khatun lost everything because of the COVID-19 pandemic and now holds on to the one thing she has left: dignity and hope of a better future for her children.

The Lutheran World Federation (LWF) in Nepal supports 4,300 families like these with income-generating activities, access to clean water and sanitation, and actions that help improve their legal status and to claim their rights. The project is supported by the City of Geneva.

The COVID-19 pandemic has hit Nepal hard. While the infections are highest in urban centers like Kathmandu, people feel the economic impact everywhere. Especially in rural areas, many low-income families relied on the salary of a family member who worked abroad, in India, or the Gulf States. When borders closed and companies lost income, the migrant workers were among the first to be laid off, leaving thousands of families back home without income. 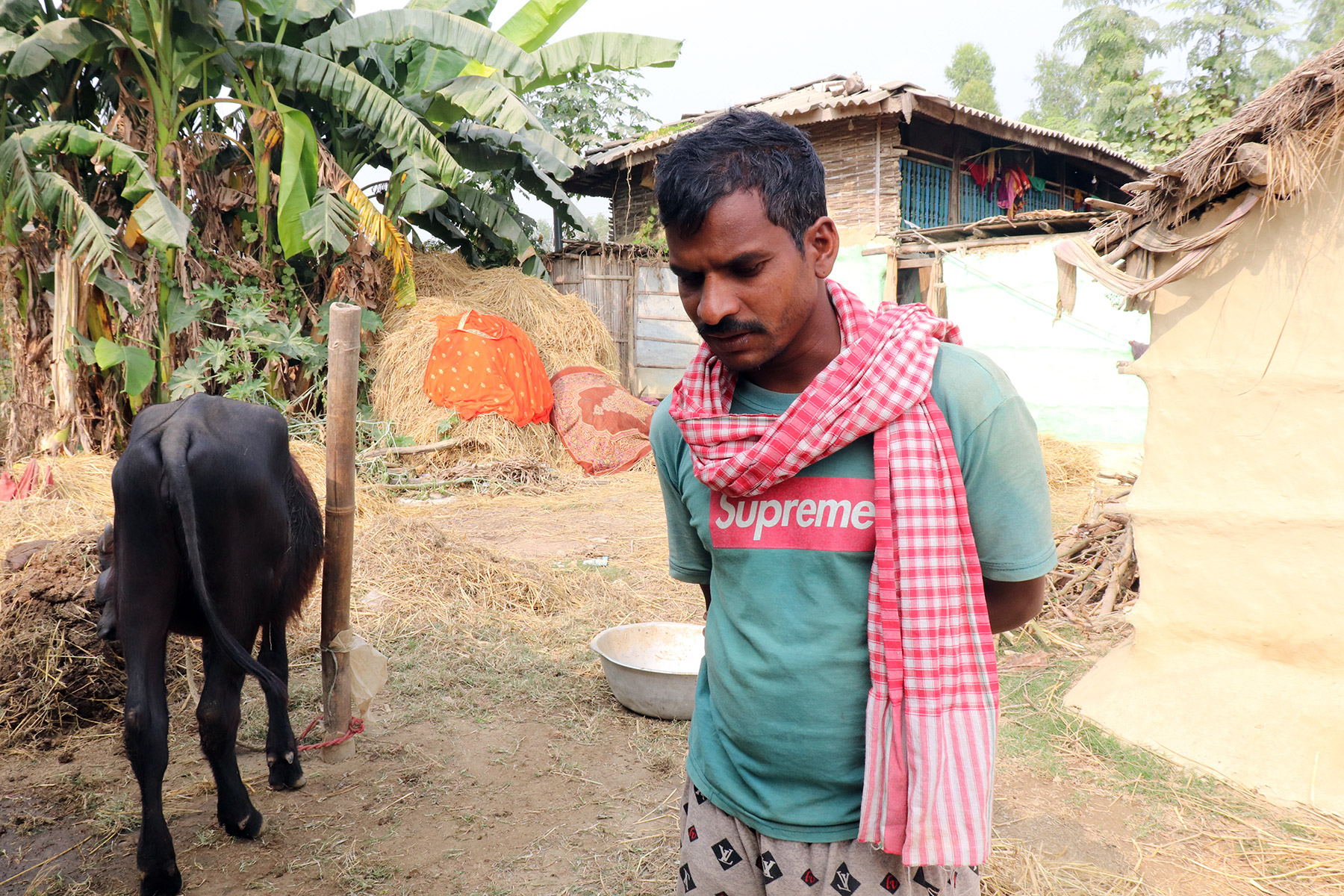 Pulkit Sada in front of his house. He is skilled in agriculture, but has no land of his own. Sada worries about the future of his children.

Sakina Khatun’s family is one of them. As Khatun is disabled from a polio infection since childhood, and mother to five children aged one and ten, she could not work herself. The family income came from her husband, who worked abroad. With COVID-19, he lost his job and his employer refused to pay the last six month's wages. He cannot return home while his wife needs to find a way to provide for the children.

Another is Pulkit Sada (photo at the top of the story), the breadwinner for a family of eight, including two elderly parents who need expensive medication. He also lost his job in Saudi Arabia when his employer went bankrupt. Seasonal work opportunities in India became unavailable when the border was closed. As a Dalit, his job opportunities are limited, as his caste faces everyday discrimination in Nepal. 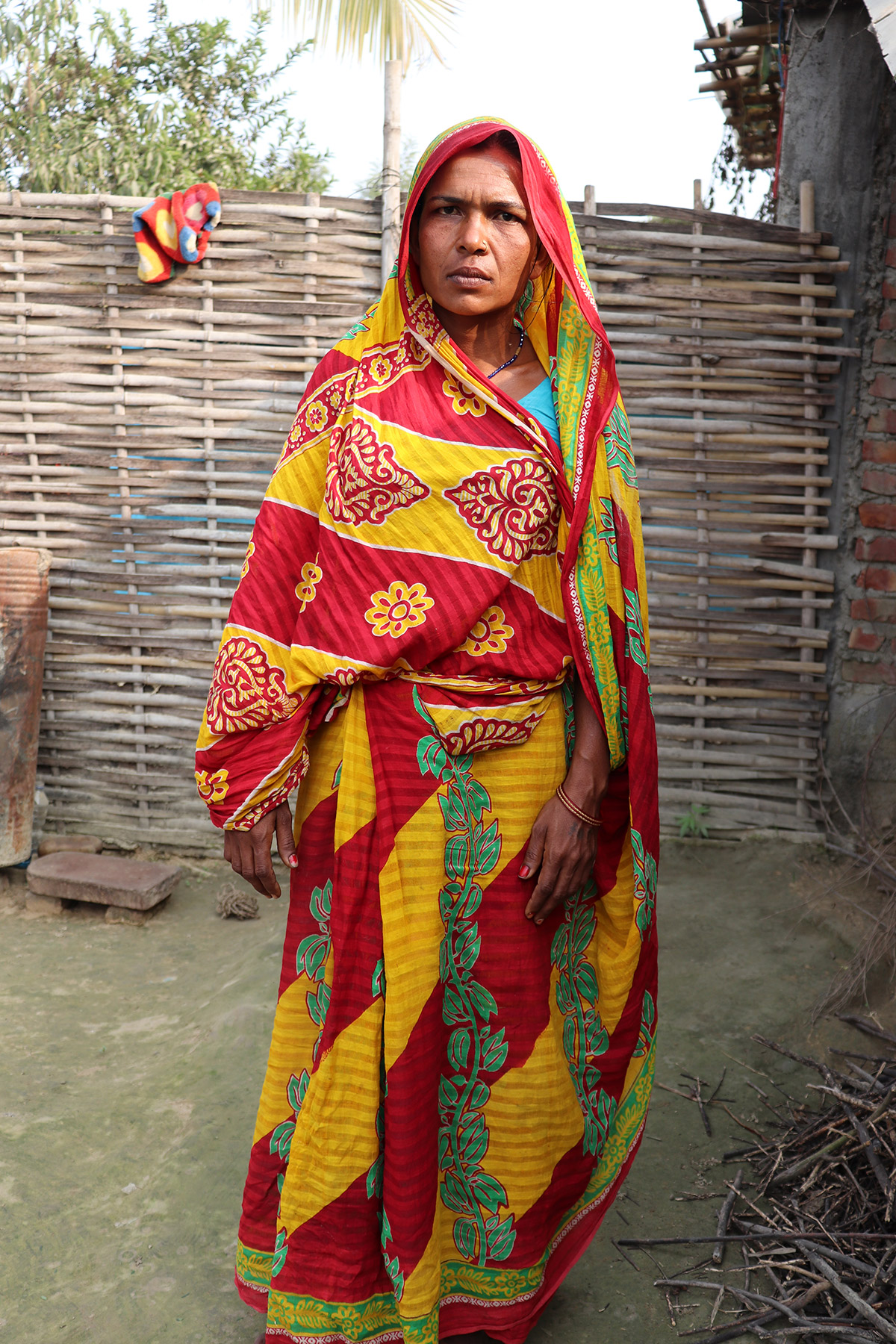 Gita Devi Mandal shares her story. The young widow had to take loans at high interest to support the family after her husband died.

Gita Devi Mandal is a widow, and mother to five children, who, after losing her husband, had to take high-interest loans to pay for school fees and medical care. Her land plot does not yield enough to feed the family, let alone pay off the debt. As a woman, she has a hard time finding work and gets less pay than a man.

The loss of income has consequences in many areas: just before the monsoon season, all of these families need to repair their roofs. None of them have access to clean water or sanitation, as their hand pumps and latrines had to be made at low cost, broke quickly, and now cannot be repaired. The children whose schools have been closed lose out on education. Ms. Khatun herself is illiterate, Mr. Sada says he lacks the necessary education to home school.

Instead, the children now have to work or take care of younger siblings while their parents look for work. They are in danger of dropping out. As education is key to better employment, this means a throw-back into the vicious cycle of poverty. COVID-19 is about to undo years of successful developments and to have long-lasting effects on the children's future.

"Our project supports the most vulnerable," says Bijaya Bajracharya, LWF Country Director in Nepal. "All of the people we talked to do not have the means to recover from the effects of COVID-19. They have no reserves to fall back on, and are victims of systemic discrimination, be it because of caste, disability, or gender."

With the support of the City of Geneva, LWF will provide 2,300 families like those of the Khatuns, Sadas, and Mandals with sustainable access to safe household restrooms and safe water with hand pumps. Also, to prevent further spread of diseases, the families will receive soap and hand washing equipment.

All of the people we talked to do not have the means to recover from the effects of COVID-19. They have no reserves to fall back on, and are victims of systemic discrimination, be it because of caste, disability, or gender.

In addition to the water and sanitation support, LWF focuses on livelihood support and development initiatives for the affected families. Sakina Khatun comes from a family who used to sell bangles and would like to use her knowledge to start a business of her own. Gita Devi Mandal would want to farm cash crops on her plot of land but does not have the necessary irrigation. Pulkit Sada has experience in agriculture but no land to farm. With land lease support and seeds, he could start vegetable farming, feed his family, and earn additional income. "I am quite experienced in agricultural work; I hope to succeed with my dedication," he says. "However, I have no chance to start on my own, as I am already in debt."

LWF, through local partner Aasaman Nepal, plans to support 1,000 households headed by single women or widows and 1,000 families, which include people with disabilities or chronic diseases. Each family will receive 20 locally produced vegetable saplings, seeds of vegetables and other crops, fertilizers and bio-pesticides, training, and technical support by using ICT techniques. Also, LWF will support 150 young people who used to work abroad and lost their employment, with skills and the means to start a farm or a small business.

"All these people already have valuable skills, which we can build on," says  Bajrachariya. LWF closely works with local partners and government authorities to ensure lasting effects. "This project aims to build resilience, so people have the means to fall back on if disaster strikes again."

Part of that project is also empowerment, to address the many injustices which prevent vulnerable people from claiming their rights. Sakina Khatun recently participated in a meeting of an organization for people with disabilities and learned a lot about her rights. She now has a card indicating her level of disability, which entitles her to pay lower fees for school and medical treatment, among others. Khatun currently participates in the organizations' meetings and has been nominated to be a delegate herself. "This has increased my confidence to speak up in my community," she says.

Since 1984, LWF Nepal has been implementing humanitarian and development projects for the most disadvantaged communities. After the devastating earthquake in 2015, LWF provided emergency aid and helped rebuild villages which had been destroyed.

The project Recovery of living conditions for the most vulnerable people affected by COVID-19 in Nepal started in September 2020 and will run for a year and a half. It is funded by the City of Geneva, and locally implemented by Aasaman Nepal and LWRS.