Grandchamp sisters join hands with visitors to the community before the start of the Coronavirus pandemic. Photo: All photos by Grandchamp Community

(LWI) - Working for Christian unity means being grounded in your own identity and thereby being open to other people’s opinions. That’s not simply a slogan for the 2021 Week of Prayer for Christian Unity, but rather it’s a way of life for sisters of the ecumenical Grandchamp community in Switzerland who have prepared the prayers and reflections for this annual event.

Founded in the 1930s in a small hamlet near Lake Neuchâtel, Grandchamp was one of the first monastic communities to be set up by a group of women from the Reformed tradition. Like the brothers from Taizé, who were establishing their own ecumenical community across the border in eastern France, the sisters welcomed women from many different denominations who were called to a life of prayer and hospitality. 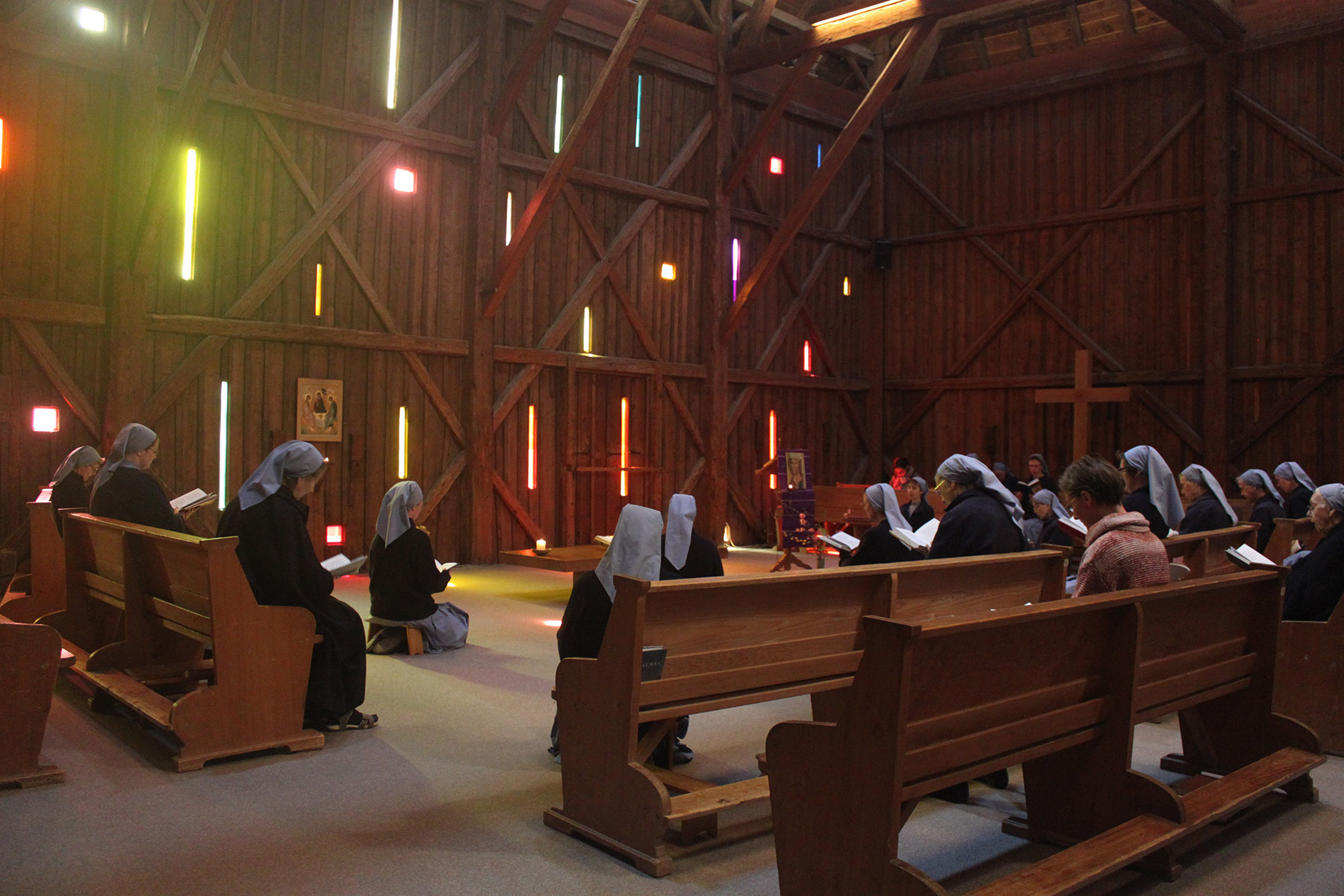 Grandchamp sisters gather in the chapel to pray.

Today, the community numbers around fifty members, from ten different countries, who continue the work for reconciliation between the divided Christian churches. The oldest sister is in her 90s, while the youngest are aged in their 30s and 40s. Unlike many more traditional religious communities, Grandchamp continues to attract new members, drawn to its way of ecumenical worship and communal living.

“It is both a mystery and a blessing that women continue to be called to this unique vocation,” says Sister Embla Vegerfors, who grew up in the Church of Sweden, the largest Lutheran church in Europe. She joined Grandchamp nine years ago and is one of a group of sisters that has been working with the World Council of Churches (WCC) and the Pontifical Council for the Promotion of Christian Unity (PCPCU) to develop the Week of Prayer resources. 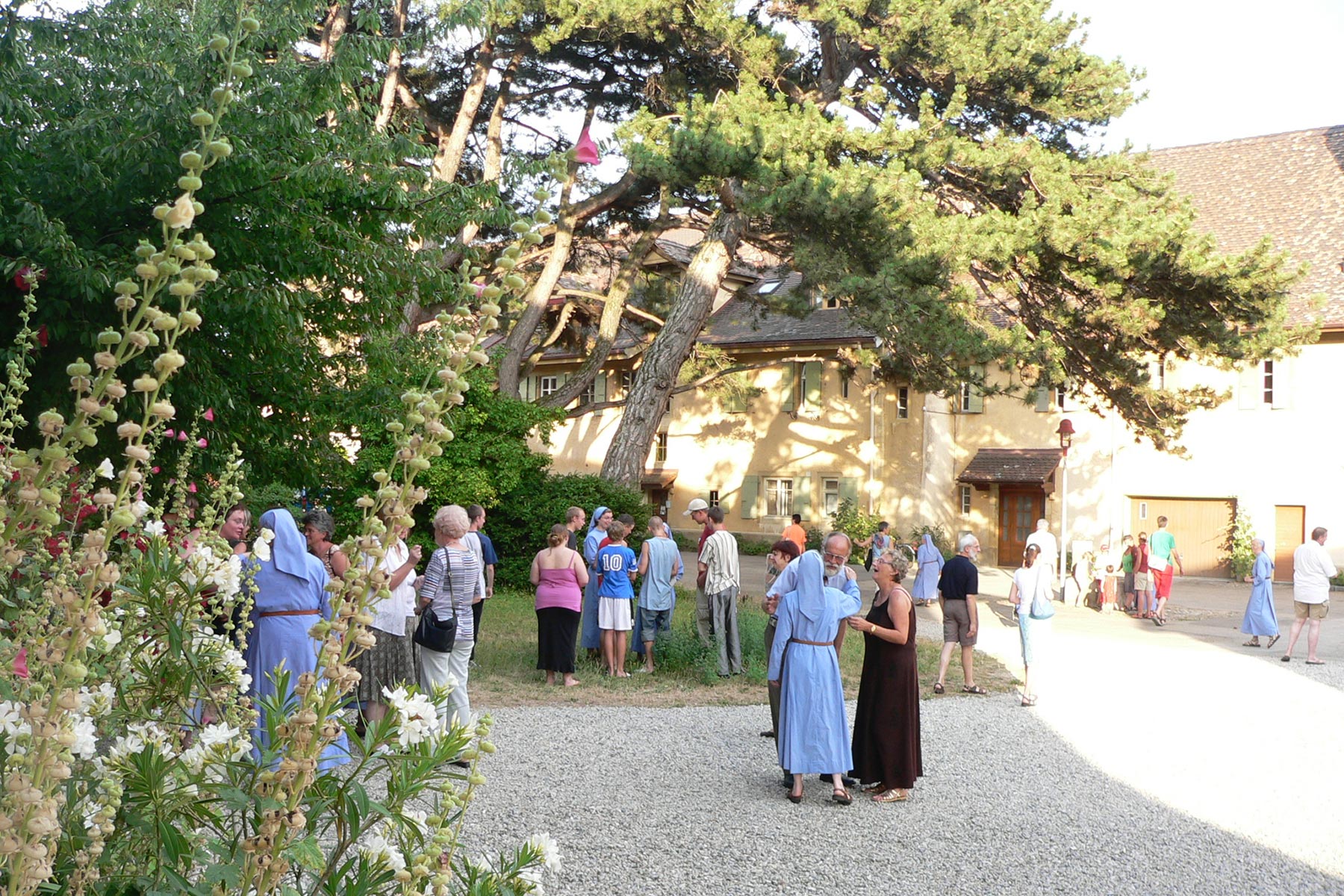 “We started by brainstorming with all the community together,” Sr Embla recalls, “and we soon decided on the text from John’s Gospel.” [Abide in my love and you shall bear much fruit: John 15: 5-9] “We wanted to share something about the way we live,” she continues, “moving from being grounded in God towards being open to other.”

Through these eight days of prayer resources, the sisters seek to share the message that unity is not about “losing your identity,” but about “being grounded in your own identity” and therefore open to others. “If we are secure in our relationship with God, then we’re also secure in our relationships with other people,” Sr Embla insists. She continues: “The differences become less threatening and we have less need to defend our own opinions. We see that someone who has a different way of doing things may be trying to express the same things as us, using a different language, but their goal is the same.” 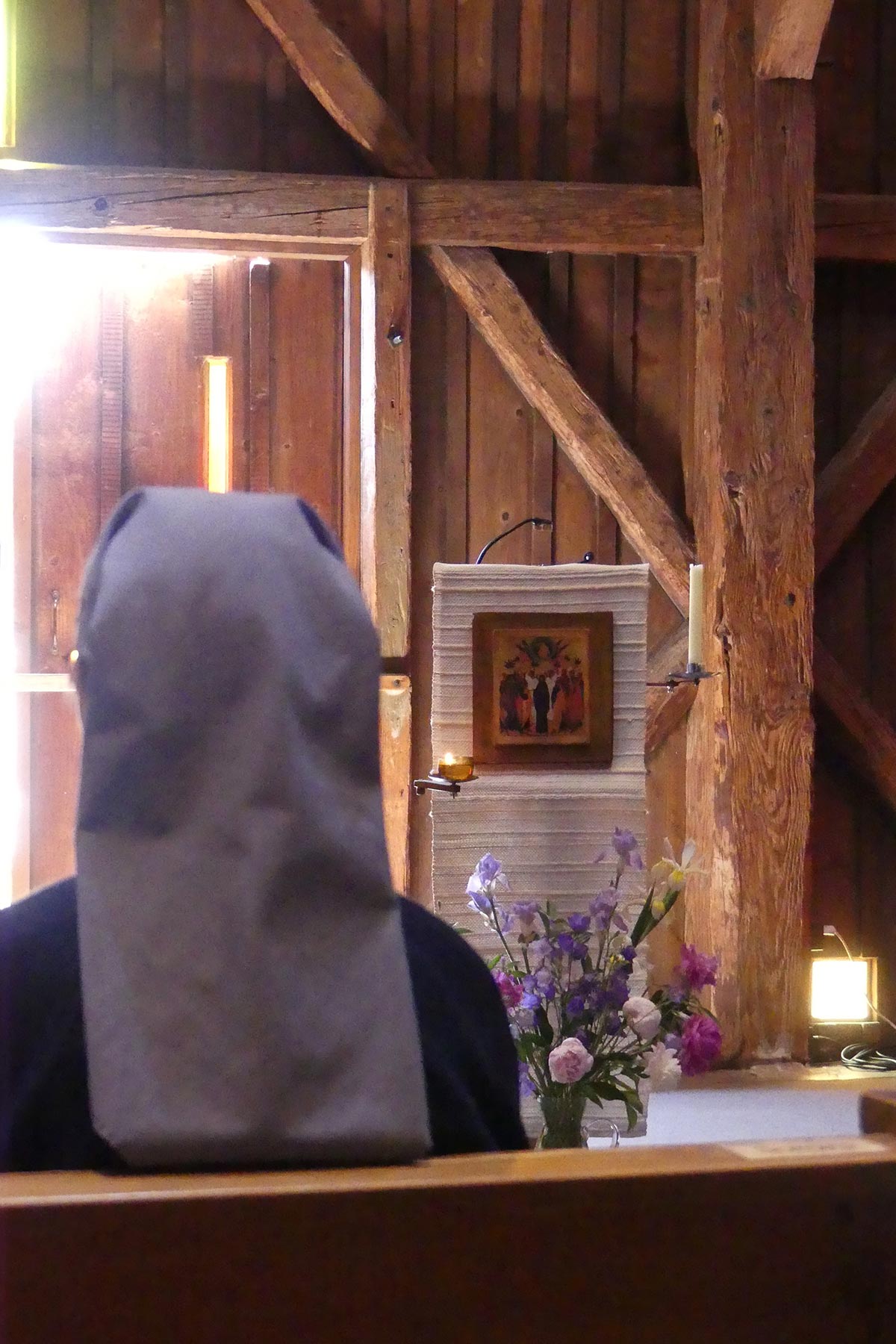 A sister lights candles on an Advent lamp.

The sisters at Grandchamp experience the truth of this in the practicalities of their everyday lives. “Whether it’s something as simple as cleaning or washing the dishes,” Sr Embla explains, “everyone who comes here has their own way of doing things.” But whatever the different backgrounds, she continues, “we have to learn to let go of our own traditions, to know where we come from, but also to enter into something completely new, and to be challenged to see that we are here for a bigger purpose.

Unity is about “being grounded in your own identity and therefore open to others.

The Lutheran World Federation (LWF) Assistant General Secretary for Ecumenical Relations, Prof. Dr Dirk Lange, met founding member Sister Marguerite de Beaumont at Taizé and recalls her as “an anchor for so many young people who visited and stayed there.” Reflecting on the sisters’ ministry of reconciliation, he says: “Prayer permeated her life and enveloped those who knew her. Today, I think about the vocation of the Sisters of Grandchamp and think about the five Ecumenical Imperatives, especially the second one that calls us on to be continuously "transformed by the encounter with the other and by the mutual witness of faith."

Prayer in time of pandemic

For many people this year, the Week of Prayer will take place largely online, as Christians are restricted by Coronavirus regulations and unable to attend worship services in each other’s churches. The sisters themselves have been profoundly affected by the pandemic and for most of 2020 were unable to welcome visitors for spiritual retreats. Several members tested positive for the virus in January, forcing the whole community to isolate and suspend all their usual communal prayer activities.

But there have also been unexpected opportunities, Sr Embla reflects, as “we feel closer to others and have been connected with people in a new way.” For several years the sisters have been live-streaming their prayer services from the chapel, but when the virus struck last March, they noticed that the numbers of viewers doubled overnight. A first online retreat over Easter was attended by more than 140 people, and sisters have also started holding Lectio Divina (Bible reading) sessions online. “It was a powerful experience for us to be alone, but surrounded by so many people,” Sr Embla says. 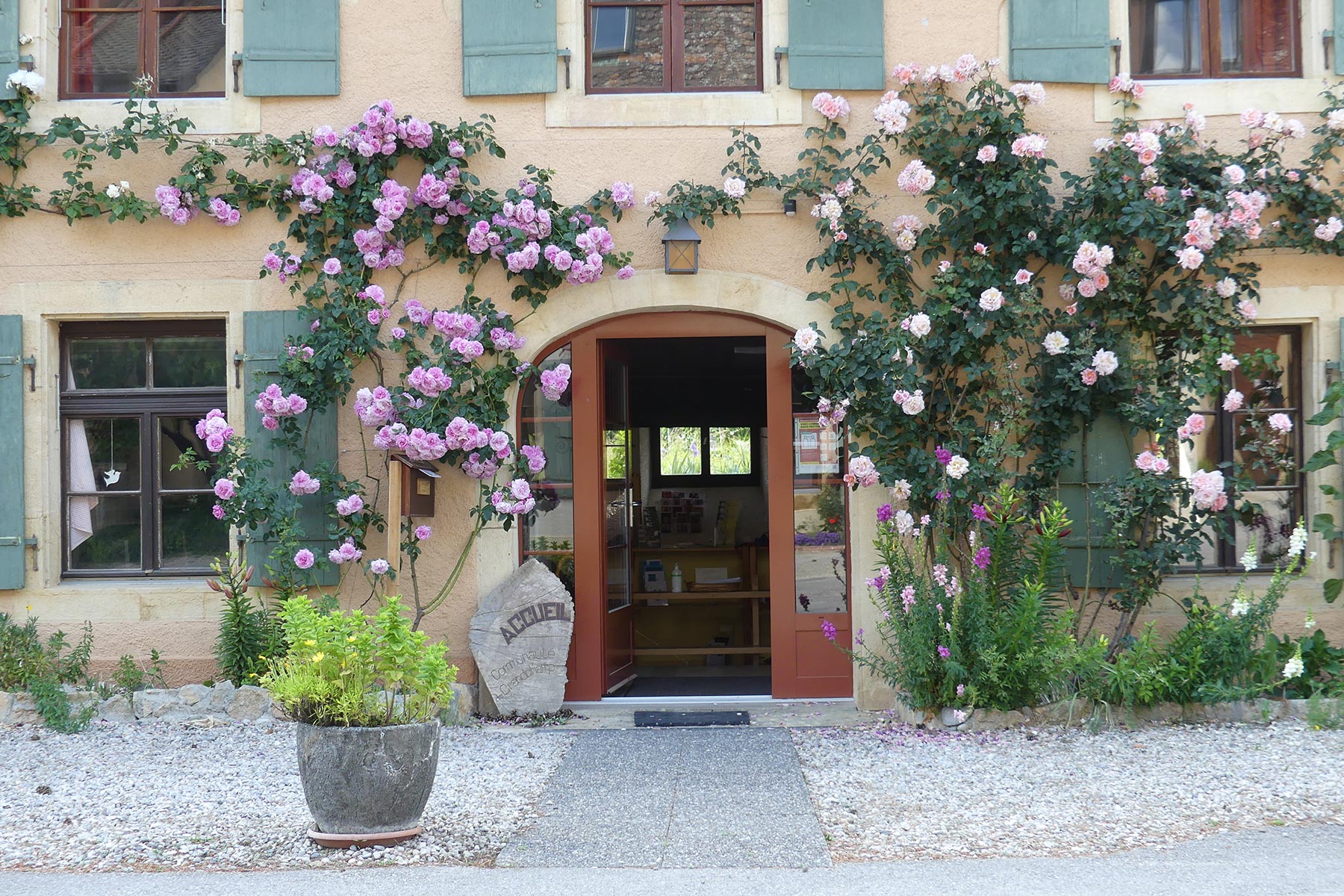 Grandchamp has suspended its welcome to guests but increased its online activities.

In past decades, sisters from Grandchamp travelled to set up a presence in other countries, including many places where Christians are a small minority of the population. A group of sisters stayed for over half a century in Algeria, living through the civil war and witnessing alongside the Trappist monks from Tibhirine, seven of whom were murdered in 1996. Other sisters lived near Jerusalem for many years, praying for peace in the Holy Land, while other smalls groups were established in Lebanon and in several European countries.

In 2016, Sr Embla travelled back to her native Sweden to attend the joint 500th anniversary commemoration of the Reformation with Pope Francis and leaders of the LWF. “For me, this was a real sign of hope,” she says, “because you could feel the desire for unity.” There are many positive developments happening in the ecumenical world “that are not so visible,” she says, with churches increasingly working together on diaconal initiatives in service to the poor and vulnerable. 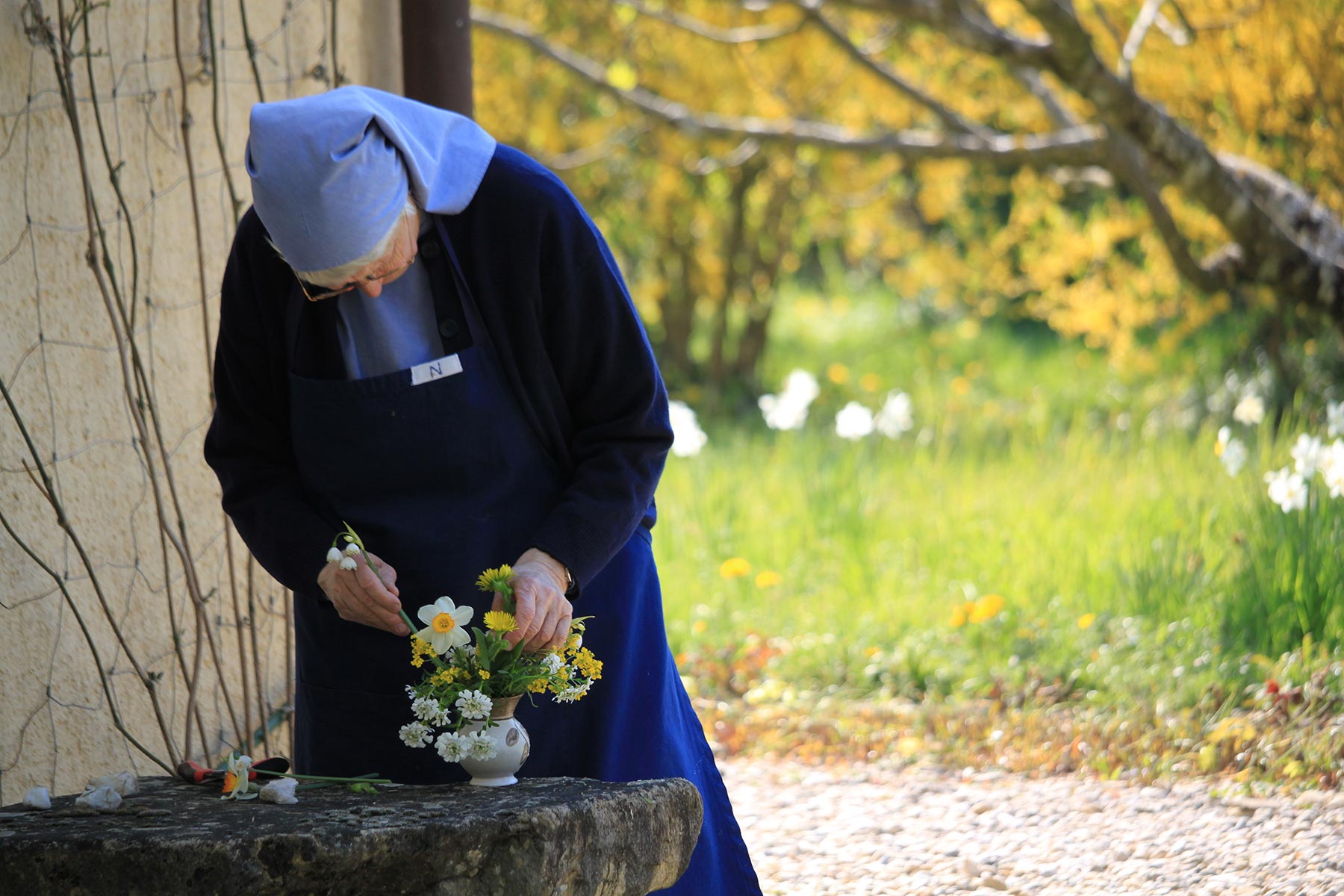 A sister arranges flowers from the community gardens.

Today the sisters travel less, focusing – until the pandemic struck - on welcoming visitors to their community in Neuchâtel and a smaller retreat house in the German-speaking part of Switzerland. “To many people today, it may seem like a strange choice to make a lifelong commitment to this community,” says Sr Embla with a smile, “but my world has never been bigger than now, as we connect through prayer and through our guests to people throughout the world.”

Despite the current challenges, the sisters see this time as an opportunity “to rethink our values and ask what changes we want to make once the restrictions are lifted, including our engagement with environmental concerns.” As Coronavirus restrictions force us “to live in a new way with uncertainties,” Sr Embla concludes, “we are reminded to turn to prayer as the center of our lives.”

WCC Resources for Week of Prayer

PCPCU Resources for Week of Prayer