Masculinity and the ministry of encouragement LWF webinar: ‘Being (hu)man in a world of violence’ engages feminism and positive masculinities

In the course of my parish and teaching ministry, I have encountered sexual and gender-based violence (SGBV) in many forms. I have accompanied victims of domestic or intimate partner abuse and sex work. I have been confronted by abusers. I have experienced ways that institutional patriarchy excludes, violates, and gives cover to perpetrators who do. False masculinities abound. They underwrite violence that dehumanizes victims and perpetrators.

At the beginning of the 16 Days of Activism Against Gender-Based Violence, we began an initiative to explore transformative masculinities. The sub-title of this three-part conversation is “Being (hu)man in a world of violence.” With partners in the World Communion of Reformed Churches, ACT Alliance and the South Africa-based Sonke Gender Justice network, we will explore masculinity and violence, engaging feminism, and positive masculinities.

In the course of the first conversation one of the partners asked: ‘Among the many facets of policy, values, and advocacy that need to be addressed, what do you think is the most important action churches could take to give us hope?’ I answered the question. I am sure the answer was fine. However, after the conversation, I realized I had focused on the wrong part of the question.

I responded to the tactical side of the question. But his question was about hope. In an age of “post-feminist” pushback, and a pandemic where rates of domestic, sexual and gender-based violence have risen as much as 40 percent globally, he was asking: ‘how can the church give hope?’

Hope is a theological virtue that is found in the company of faith and love. Hope holds grief and pain. St. Augustine wrote that hope has two daughters: Anger and Courage. So, if I had a second chance to answer the question, this is what I would say. The actions that churches can take to be a sign of hope fall into two categories. Anger and Courage.

We must be angry. As a husband, father, being entrusted with stories of men who abuse the holy trust given in marriage, parentage, or friendship makes me angry. Brothers in Christ who profess faith, yet do violence to another member of the body of Christ, or use their position to leave patriarchal policies unchallenged make me angry. And this is as it should be.

Men who confirm their baptismal vocation must be righteously indignant in public spaces. Anger should move us to confront all forms of SGBV with the soul force of Jesus’ third way of non-violent resistance. We must teach spiritualties of non-violence and non-violent communication. We must continue to sensitize one another to violent behavior and reform policies that tolerate gender-based violence or exclusion in our churches. There is a place for creative anger in Christian love. Anger at the status quo is a sign of our hope in what is to come.

But hope’s other daughter is courage. In some western traditions, courage is a cardinal virtue. Unlike a theological virtue that is a gift of the Spirit, courage must be cultivated.

I am grateful for the privilege with which I speak about positive masculinity. I was raised in a non-violent home. Masculinity was embedded in an aspirational social system with respect to gender norms and the equality of women in family, church and society. Men who aspired to gender justice were generally affirmed, and therefore did not demand a great deal of courage.

But I have lived in and served in diverse linguistic and cultural contexts with very different world views from my own. I have witnessed the great courage it takes for a man to critique hegemonic masculinities that are received through stories and rituals, or the regressive behavior experienced in their own initiation. I have seen the physical dis-couragement of men who have resolved to never violate, but have not yet found the courage to challenge men who do, or systems that tolerate it.

These men are not necessarily waiting for a new concept of masculinity. Post-colonial approaches to gender studies are starting to detect the counterproductive effect of categorizing “masculinities.” Transformation happens when men are self-reflexive. Reconnecting to sources of wisdom about being human and positive cultural archetypes of masculinity (including biblical and theological traditions) equips men to critique the violence that colonizes our social and religious narratives about gender. Liberation comes from within. This group of men may know it, but yearn for courage.

I have witnessed the en-couragement that a man receives when another nurtures the seed of non-violence. When another man affirms our confession that the Holy Trinity is a community of love, and ours are the hands that are called to tend loving relationships. Solidarity cultivates the courage that transforms a single man into a multiplier. Contextual Bible study, creative writing, music, drama, and sustained dialogue with trusted men en-courage. Encouragement nurtures aspirational shoots to bloom. Encouragement cultivates fruit that honors yet alters the cultures from which they grow.

I have witnessed the en-couragement that a man receives when another man affirms our confession that the Holy Trinity is a community of love, and ours are the hands that are called to tend loving relationships.

I have experienced this ministry of en-couragement. The stories are theirs to tell. But I can share a story that is public domain, because Luther wrote about his own transformation. The experience of God’s love in marriage, family and friendship liberated him to extend the logic of reform to domestic and social life. It is true that Luther never really escaped the gravity of violence. He was perhaps more aspirational than he realized. But his sermon on the Estate of Marriage reveals how his relationships encouraged him to be an upstander against the hegemonic masculinity of his day.

“Now you tell me, when a father goes ahead and washes diapers or performs some other menial task for his child, and someone ridicules him as an effeminate fool—though that father is acting in the spirit [of] Christian faith—my dear friend you tell me, which of the two is most keenly ridiculing the other? God, with all the angels and creatures, is smiling…"

May the Spirit’s gift of Hope sustain our anger and courage, as we continue to call men and boys to the faithful work for gender justice.

During the 16 Days of Activism against gender-based Violence, the LWF has organized a series of webinars on how to work toward transformative masculinities and promote gender justice in a post-pandemic world. In the second online discussion on 9 November, feminist experts will share their views on masculinities in the church and discuss ways of empowering every person to be fully human in a world of mutual, caring, interdependent relationships. A second stage of the transformation process is planned for 2021.

register to the webinar 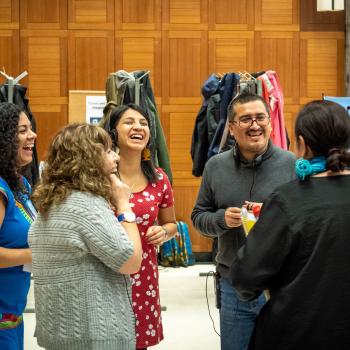